Several Yakima Police Officers were honored on July 12th by the Yakima Kiwanis Club . The officers were honored for their heroic efforts in saving the lives of several senior citizens at the Heatherton Senior Condominiums in March of this year. Yakima Police Officer Brad Althauser, who was given the “Everyday Hero Award” first saw smoke from the roof of the condo’s while patrolling the area early in the morning and then began knocking on doors and helped to evacuate over a dozen residents. He was quickly joined by Officer Phil Amici in the evacuation and then a few moments later other officers arrived to help. If not for the heroic efforts of the officers there would have been significant loss of life. Other officers honored along with Althauser and Amici were Officers Jim Adams, Ian Cole, Miles Imbery and Ben Graves along with Sergeants Jim Moore and Ira Cavin. Several of the citizens rescued from the fire attended the luncheon to personally thank the officers. 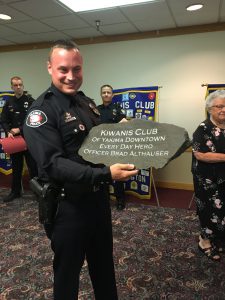 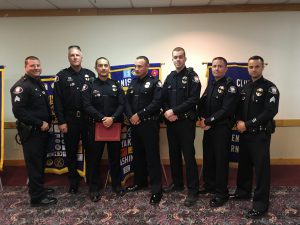 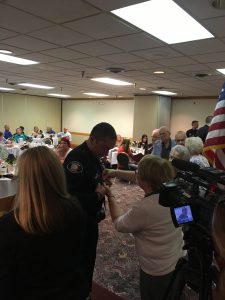